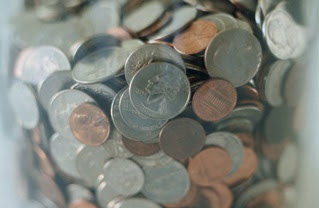 Truth be told I've known about this initiative by Coinstar for a little while now, mainly through following one of the companies (Rixty) listed in the release, so I was thrilled to see this news hit the wires yesterday because it's a great example of a traditional brick-and-mortar based business finding creative ways to get in the new media world game.

The basic premise is that Coinstar is allowing consumers (read: pre-teen and teen gamers with no access to credit cards as a way of paying for their digital entertainment addiction - I mean, hobby) to turn in their coins in exchange for pre-paid spending cards for onling games, virtual worlds and social networks. Some of the other digital entertainment properties attached to this initiative include Aeria, Stardoll, WeeWorld, Adventure Quest Worlds and, perhaps most importantly, Facebook and MySpace. I'm sure that more companies in these spaces will soon follow suit and join the Coinstar consortium -- the question is, can mainstream media companies be far behind? Hulu pre-paid card anyone?!

Just when you thought that Sparkletts water bottle full of coins was never gonna see the light of day!!
Posted by Unknown at 12:29 PM 1 comment: