TAKING A PEEK AT THE PEEK 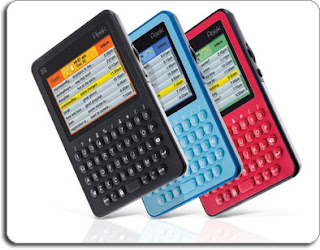 I'm sure some of you have already seen this new mobile communication device called The Peek - but for those of you who haven't, let me be the first to give you my two cents about it . . . don't bother.

What is it you ask? Quite simply, it's a portable device that is 100% dedicated to emailing and texting. According to their CEO Amol Sarva, there are a ton of people out there who want a simple to use (it only takes a few minutes to set up) and affordable ($49.95 for the device and $19.95 a month with no contracts) device that allows them to stay in touch on the go - but without having the ability to actually call and talk to people.

Don't get me wrong, it's a pretty slick looking device - and I'm sure that there will be folks out there for whom this is a perfect fit. But I personally think that there are a number of factors working against it, including:

1. Device Fatigue -- as we continue to be bombarded with more and more choices when it comes to portable devices (cell phones, smart phones, digital cameras, laptops, netbooks, etc.), at the end of the day most people want to simplify their lives and pare down on the number of devices (and power cords) they use and have with them at all times. And more likely than not, these same people will be willing to pay a premium for the convenience of less devices.

2. Email Is Becoming Less and Less Relevant -- we can't deny that we're in an age of immediacy that is being driven, in large part, by the continuing proliferation and use of telephony and texting functions associated with pretty much all cell phones these days - not to mention the meteoric rise of social communication tools like Twitter and Facebook. As a result, email is being used more and more as a third or fourth option when it comes to communication. So when faced with the choice of having a device that allows you to talk and text (in addition to a handful of other bells and whistles), or one that lets you just text and email, chances are you'll choose the former.

3. Price -- while 20 bucks a month is definitely a good deal, the reality is that most people are still willing to pay a bit more for a portable device that fits the criteria mentioned in #2, in addition to having other utilitarian features such as a camera and Internet access (through which, by the way, you can also access and use email). And it's safe to assume that pricing on mobile phone services from the carriers will only continue to go down.

Long story short -- extremely slick looking device with a price point and service that may appeal to an extremely small group of consumers, but at the end of the day, less is more when it comes to devices.
Posted by Unknown at 9:33 AM 1 comment: